A couple weeks with the Microsoft Band 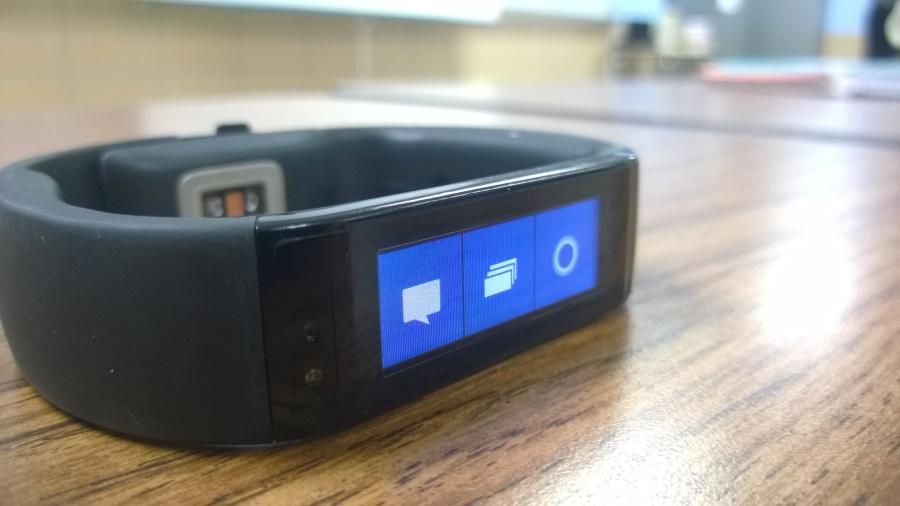 Smartwatches and fitness trackers seem to be all the rage these days, with new ones popping up seemingly every single week from companies like Fitbit, Jawbone, Motorola, LG, Samsung, and Apple. Typically, you get one or the other: a smartwatch or a fitness tracker. Microsoft’s first foray into the wearable world of tech is an attempted combination of two. It’s mostly a fitness band, but it also has features that you’d typically find on a smartwatch.

There are two buttons present on the device, one “power” button and an “action” button. The power button is pretty self-explanatory, while the action button is used to start one of the band’s workouts, start sleep tracking, or if you hold it, to launch Cortana, Microsoft’s version of Google Now or Siri. The downside of this is the fact that you can only use this feature if you have a Windows Phone. Talking to your wrist is something that feels incredibly futuristic while at the same time super dorky, so it’s probably something you won’t really use in public unless necessary.

The battery usually lasts about a day in a half in my usage, slightly under Microsoft’s claims of 2 days. It’s not much of an issue, though, as charging it usually takes less than an hour, so you can plug it in while showering or doing other things. Speaking of showering, the band is not waterproof, only “splash resistant.” This basically means it’ll deal with getting a little water on it while washing your hands, but that’s about it.

The fitness aspect of the band is what is really emphasized by Microsoft, and it shows. Through the app it communicates with, Microsoft Health, (available on iOS, Android, and Windows Phone) you’re able to download “guided workouts” to your band. Then, when you want to begin one, you swipe to the guided workouts tile, hit the action button, and go. It’ll tell you what to do and have a countdown timer on the watch to know how long to do it. For example, it’ll have you do crunches for a minute, then a rest, then bodyweight squats for another minute. There are all kinds of options for these workouts, and you can get them from places like Gold’s Gym and __________. During all this, the band is constantly tracking your heart rate as well as how many calories you’ve burned so far. There’s also the ability to have it track your run with GPS, without the need of your phone. If anyone knows me, they already know that I haven’t tested that feature out yet.

The heart rate monitor on the device is very beneficial, as it allows the band to more accurately judge how active you actually are, and estimate how many calories you’ve burned. You’re able to set step and calorie goals for the day in the app, and it’ll also plot how active you were for a day or even a week. The app is very well put together, but it’s a shame that you can’t get to any of this information on a computer or web browser.

While there are technically apps for this device, they are quite limited. The device wasn’t really made to host apps or any of that, but what they have on there works. You’re able to look at text messages and notifications from your phone, you can look at your calendar or Twitter, and there’s even a UV sensor to tell you how long it’ll take on average for you to get a sunburn. There are a few quirks with some things though. While you can respond to text messages, you’re limited to just 4 options that you set in the app, and you must respond right away. If you don’t, there isn’t an option to reply to messages after that. There’s a Starbucks app that you can link a gift card to, and the cashier can just scan your wrist, which works quite well.

The Microsoft band does exactly what it says it does. Nothing more nothing less. Sure, putting on a fitness tracker won’t make you lose weight or become stronger or anything instantly, but it definitely makes you aware. You keep finding yourself taking walks more often to places, choosing to take the stairs, just so you can reach that step/calorie goal for the day. It makes you realize how lazy you actually are and motivates you to do something, and that’s good enough for me. The super cool notifications and the ability to text someone by talking to your wrist feels futuristic yet it’s in the present. Is it worth $200? That’s up to you. If you’re in the market for a simple and cheap fitness tracker, you can find cheaper alternatives without a screen. If you’re looking for a smartwatch, you’ll most likely be disappointed by the lack of features. But if you want something with a little of both, this is the way to go. There’s simply no other device on the market with the blend of watch and tracker like Microsoft’s.