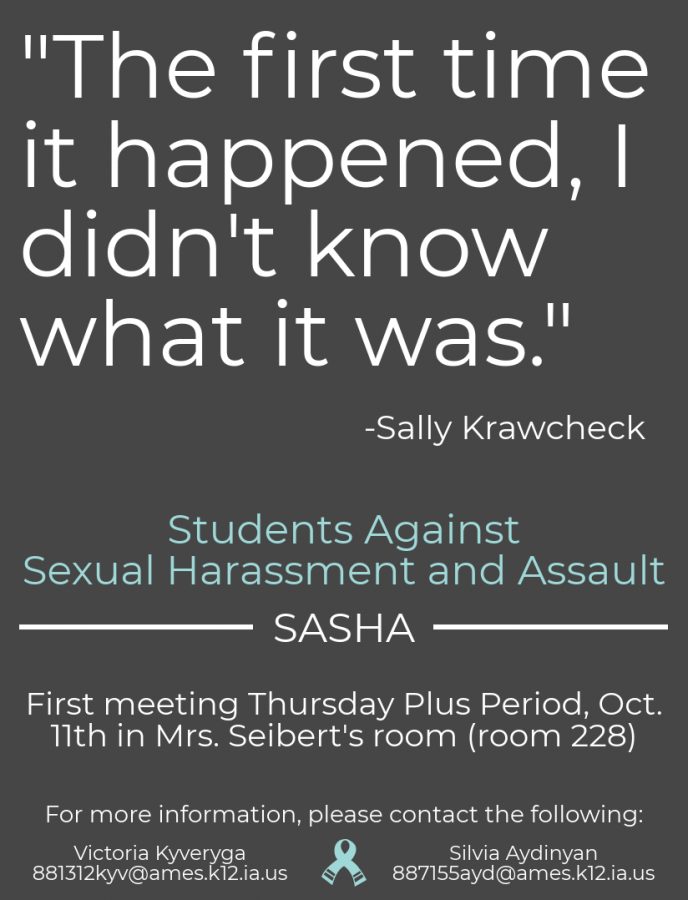 92 seconds. That is how often a person is sexually assaulted in this country, be it a 12-year-old or a 50-year-old. Junior co-leaders of SASHA (Students against Sexual Harassment and Abuse) Victoria Kyvergya and Silvia Aydinyan knew that something could be done from their part about this issue. Speaking about Sexual Harassment and Abuse comes sometimes comes with awkwardness or hesitation but as sensitive as this issue is, it holds substantial intensity. Members of SASHA are taking action locally by initiating discussions, organizing events, and bringing speakers to AHS. Although this is a fairly new club, the response they received has been quite positive, many people have shown interest and have gotten involved with the club.

There are several reasons to start a club, from being passionate about something to creating a club just for the college applications. However, for Silvia and Victoria, it was more than just creating a club for their resume, they wanted to make a change in their community. Their main inspiration to start SASHA was based on personal experiences and other people’s stories as well as the people that faced oppression on a daily basis. “

The founders’ inspiration for creating SASHA also came from their own personal experiences, like those of Victoria, who revealed that she was sexually assaulted at the age of 10 in her dad’s hometown in Ukraine. As a co-leader of SASHA, she felt it was ironic that she was leading discussions about these issues and encouraging people to speak up, while she herself remained silent about her personal experiences. She strongly believes that speaking up about these things is important especially in today’s society.

When asked about how SASHA was created, Silvia said, “A large part of why our club was created was because of the MeToo movement, it initiated this whole conversation all over the world and we just wanted to continue that conversation with our community”.

The MeToo movement also reflects a lot of smaller microaggressions that we quite often see within our community, it brings it to light on a national level and highlights how important and relevant the issue is in today’s world. When asked about the club’s future plans, Victoria said, “We plan on collaborating with the Middle school sometime in the future, we would also like to arrange sessions during a Health class that would help spread awareness about this issue starting from a young age”. They also merge with AHS Girl Up occasionally where they combine volunteers for certain events and work together as both clubs have similar goals. SASHA also plans on having a documentary night so keep an eye out for that.

SASHA meets every other Thursday in Mrs. Seibert’s room. They also coordinate with other clubs such as DECA and Key Club so that their meetings don’t fall on the same day. If you’re interested in joining, you can just show up at any meeting! If you’re someone who’d be interested in having these discussions and listening to speakers, then grab a cookie and take a seat because SASHA is just for you.