The Lone Kid Behind Lonewolf 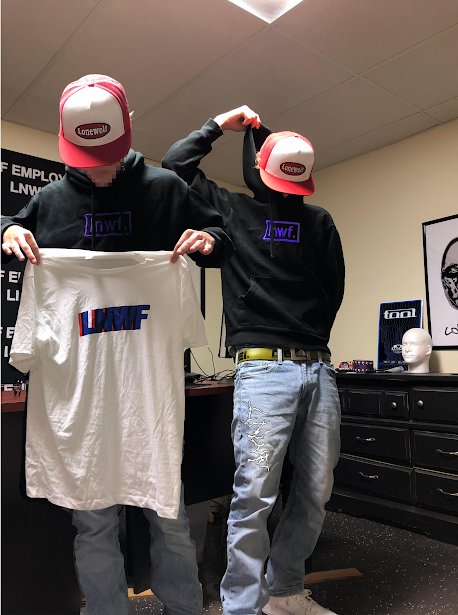 In some ways, senior Bjorn Iverson is similar to many other Ames High students. He is a member of quiz bowl and marching band, and he enjoys being a part of a team. If you know him, he is most definitely ‘supportive, relaxed, and encouraging,’ the three words he used to describe his character.

But what may not be so well-known is that he’s also an entrepreneur. He is the founder and creator of “lnwf” (an abbreviation of the word lonewolf), a streetwear brand focused on being less flashy, more affordable, and more inclusive than other brands.

You may have seen someone around Ames High wearing a hoodie or t-shirt that says ‘lnwf’ on it, and have been motivated to ask them what it is or where they got it. That is the entire purpose of his brand.

Around freshman year, Bjorn started getting tired of seeing repetitive and unoriginal streetwear. “If you’re wearing Nike or even Supreme these days, nobody asks you about it. Those brands are so big they aren’t unique anymore,” he said.

In order to keep the brand relatively small, his designs are created to be specific and appealing to a certain demographic. However, he wants to make sure that anyone who likes the clothing would feel encouraged to have it, even if they didn’t fit that demographic.

The process for creating a new collection starts with the ideas. Bjorn explained that he usually makes a new design by playing around with settings and filters on his computer, but sometimes an image just pops into his mind, and he uses that to create something. And then they are digitized and sent to a shop to be printed onto the clothing.

“I haven’t made a logo for lnwf because I want to avoid slapping it onto every piece of clothing I make, and ruining the creativity,” he noted. The items are sold on his website, lnwf. store, or locally in person. His collections are new every time, and once they sell out he moves on to the next project. Local drops sell out especially fast, so people have to buy right away.

Currently, he is coming back from a small hiatus. “The commercial side has stopped, but not the creative side,” he explained. There will be several new designs dropping in October.

Bjorn is also behind the Draco Bankes project, which is his artistic name. Under this name, he created more exclusive and more expensive items, or things that wouldn’t necessarily fit well with lnwf’s collections. “Usually, that stuff is rarer, so I might make a totally new design, but only one piece for it. So those pieces will sell for more because of the exclusivity,” he said. All of the proceeds from that project go to charity.

While Bjorn is only 17, he has found a project that will lead him into the rest of his life. He plans on going to ISU for graphic design and business with the idea of continuing his company during and after college.