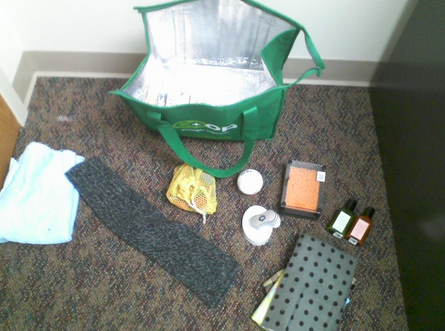 Students at Ames High are asked to use the items in this “care bag” at the counseling to give sensory input that can help to alleviate the urge to self-harm.

As much as high school students hear about drunk driving, drugs and unprotected sex, one major problem that is often ignored is Non-suicidal Self Injury (NSSI). It is also known as self-harm or cutting and is the practice of injuring oneself for emotional relief.

“Kids see it, they are talking about it more, [and] kids that are in distress think that maybe that’s somehow something that would help them.”

An Ames High student who self-harms and wishes to remain anonymous does it about once a week. She’s done it since last year. “Too many times to count,” she said.

“It takes the pain away,” she said. “It’s like letting it out on yourself instead of other people.”

She says it’s hard to hide her scars. She wears long sleeves and bracelets to cover them, but friends and teachers have found out and confronted her. Counselor Burke said that students like her have come in with concerns about NSSI before.

“It is a tricky illness,” Burke said. “It can take a wide spectrum of forms. What we see most often at the high school, and what people think of more often, is the slicing of the forearms or legs.”

The anonymous student cuts her arms or legs. Her parents don’t know, and she isn’t planning to tell them. She said despite knowing about NSSI before she started, she didn’t start because she knew about it. She said that it began when she “hurt somebody she really cared about” and that bullying contributed to her self-harm.

“I’d heard about it, and I didn’t want to go down that path, but I didn’t know what else to do to take the pain away,” she said. “My whole life I’ve been bullied. When I’m bullied, or I hurt someone, I take my anger out on myself.”

According to Burke, the act of self harming is often done to bring “closer contact and experience with their senses,” or as an addictive or obsessive-compulsive behavior. The counseling center keeps a “care-bag” that contains sensory objects like fragrances and rough surfaces to help students with NSSI.

“There is a certain release of brain chemicals that they get from self-harm,” he said. “For many of them it’s one of the things they can control in their life; they can’t control other things. What they can control are these sensory experiences they can create.”

He said that many NSSI cases are mistaken for suicide attempts due to the similarity between suicidal behavior and NSSI. They are related. According to the British Journal of Psychiatry 40-60 percent of suicidal people have a history of NSSI.

“We don’t know how serious the self-harm is if they’re just doing it to create a release or if they’re actual [suicide] attempts,” Burke said.

The student said she felt NSSI was a way to let off steam and relieve stress.

“It’s like crying out for help…but I really don’t know how to ask for help,” she said. “It’s the only way I can release my pain.”

According to SAFE Alternatives, 13-30% of adolescents have self-harmed.

“The perception has been that it’s not as prevalent,” Burke said. “When people see it, the lights go off, they just kind of freak out.”

The student feels like she’s trapped in a vicious cycle, where she is upset by her self-harm, and she deals with the anxiety and anger by self-harming. Although she’s in a bad place, she is optimistic about the future. Her friends are “right beside her” and very supportive.

It’s a big problem, and the numbers are going up. Over three million adolescents practice NSSI regularly. According to SAFE Alternatives, 1 in 25 adults do too.

“It is hard to understand, hard to discuss, hard to wrap your head around,” Burke said. “I think there needs to be more dialogue about it and understanding.”