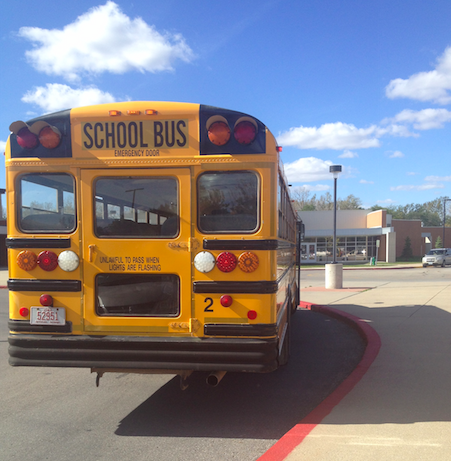 Monica Gordillo-Herrmann, super-soccer mom, part-time business lecturer at ISU, is finally able to not worry about her 14-year old son missing the first half an hour of his school day.

“[One morning, Felipe] was waiting for the bus, and the bus never came,” Gordillo said. “He had to come back home half an hour later. I had to take him to school 3 or 4 times.”

For the first few weeks of school, students who rode on the bus system had unpracticed drivers, which made them up to 90 minutes late both from home and back. Various stories like this have been circulating among parents and community members.

Gordillo-Herrman has a friend who, to investigate the route, hopped in her car after her son got on the bus one morning.

“She said, ‘I’m following this bus because I don’t understand how it could take this long,’” said Gordillo-Herrmann. They ended up going across town twice.

Seventh grader Connor VanWeelden had similar experiences. “It got very annoying having to show where the driver should go,” VanWeelden said, “and then they’d [still] go the wrong way.”

Not much has changed this year: this is the final year of a five year contract with, and we’ve known the school was starting on August 14 since early last year. Why, then, were so many parents stressed?

“It was sort of a perfect storm of difficulties,” said Jane Acker, member of the Ames Community School District Board. She had been tuned-in to the complaints as well. “There were just mess-ups that [Durham] didn’t do a correct job of [handling].”

The elementary and middle school’s different start times contributed to these said mess-ups, as well as a malfunction in the communication between infinite campus and the software that the bus system uses.

In addition, Acker said, “We had a huge increase in number of students requesting bus transportation in the last ten days of school.” She said that number rose 40% from last year. With a heavy reliance on software such as Infinite Campus and Versitrans (the bus company’s primary software), when something small gets messed up in those systems, it can have big consequences.

Thanks to an increase of communication between district staff and Durham, the issues have been resolved. But for next year, what to do concerning bus companies are still up in the air. In any case, parents will be even more peeved if their students miss the entirety of first period just because of the buses yet again.

“Because it is stressful,” Gordillo-Herrman said. “It is the beginning of the year, and you want everything to be good.”

Parents and students alike hope the year next year starts off on the right foot.

Contact Karen Shimp at the business office in the Crawford building if you have any comments or complaints.