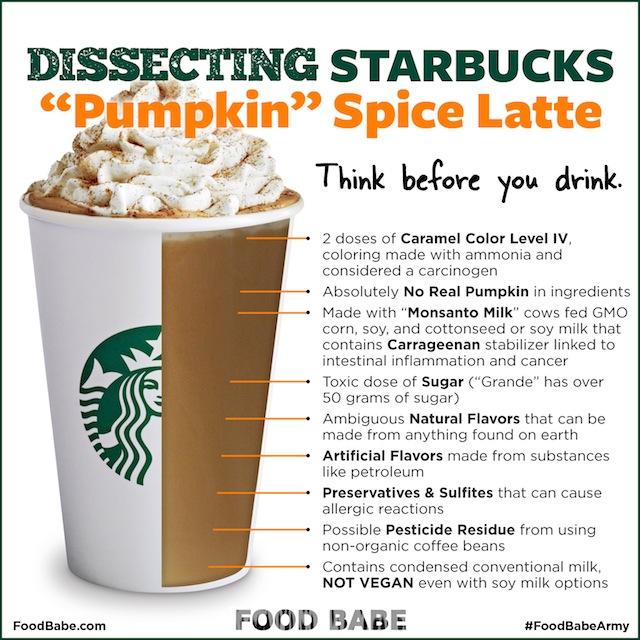 Starbucks’ Pumpkin Spice Latte is a seasonal favorite, with its lovely taste of pure pumpkin amazingness in the grande-sized white Solo cup with the classic green logo that looks like the Statue of Liberty. (Truth is, it is a depiction of the mermaid “Siren” due to Seattle’s strong seaport roots.) Despite the delightful drinks that Starbucks offers, there has been a recent heap on the issue of transparency of this drink business.

Customers should have the right to know what they are consuming, but Starbucks often refuses to disclose its ingredients. Starbucks has been one of the businesses resistant in sharing the ingredients of its drinks. Many food nutritionists have attempted to contact Starbucks for full disclosure. After many futile trials, the results were quite unpleasing.

Food nutritionists reveal the full scope. The drink begins with the base of condensed conventional milk. The use of non-organic coffee beans leads to possible pesticide residue in the drink. Preservatives and sulfites are imbued in the drink, which may cause allergic reactions or asthma attacks and is linked with DNA damage. Shockingly, there is no actual pumpkin in the drink; Starbucks simply uses artificial flavors to highlight its taste of fall.

Among the miscellaneous ingredients mixed into the Pumpkin Spice Latte, the most atrocious is the “Class IV Caramel Coloring”. A U.S. government-funded study found that feeding mice caramel coloring IV increased their risk of developing lung cancer and leukemia at every dosage level. The International Agency for Research on Cancer classifies 4-Mel (a byproduct in Class IV Caramel Coloring) as “possibly carcinogenic to humans”. The Center for Science in the Public Interest (CSI) petitioned the FDA to ban caramel coloring in 2011 due to safety concerns and the cancer risk of allowing this ingredient in our food.This coloring has no nutritional benefits and is only used cosmetically to improve the appearance of food and drinks, yet there are safer alternatives available to food manufacturers.

This sounds super serious. I am not trying to sound overly critical, as I also have been guilty of the late night Caramel Macchiatos and the occasional Green Tea Frappucinos (ordered ‘skinny’ to reduce to guilt). The problem boils down to the fact that Starbucks, and many other businesses in the franchise industry, have been reluctant to share the true ingredients of their foods and drinks. Many companies explain that they have menus with Nutrition Facts posted on their websites. But in reality, many of the items are left blank, with no specification of the number of calories or the grams of sugar. Maybe we can call it neglect, but maybe we can actually call it “censorship of the truth”. Consumers should have the right to know the components of the food or drink they purchase.