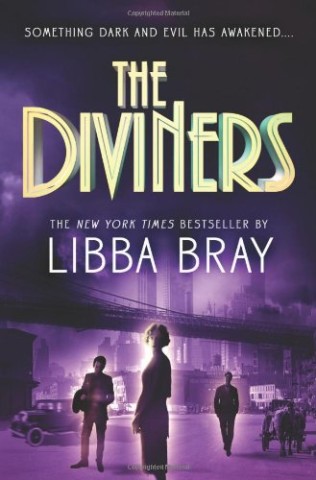 My dad is a very picky reader.  He absolutely refuses to read any book that is part of an unfinished series, and thus I have made it my goal to trick him into reading as many unfinished series as possible.  I am a very good daughter.  The Diviners, by Libba Bray, is one of the books I made him read, and, for once in his life, he did not threaten to disown me for giving him a work in progress series.

I took this as very high praise of the ending, which is neither a cliffhanger nor a straight finish.  But you’ll have to read it to find out what the end’s like.

The beginning, however, that I can talk about without fear of spoiling the book, and it is marvelous.  I can usually tell whether or not I will like a book from the first few pages, and the first chapter of this book was absolutely stunning.      It begins with a group of young adults who decide to play with an ouija board and unwittingly release the spirit of a ghostly serial killer determined to transform himself into “the beast” and bring about armageddon.  The NYPD calls him the Pentacle Killer, and in order to learn more about the obscure cult he seems to be a part of they call up the museum of creepy crawlies, where the heroine is staying with her uncle.

At first it seems a “simple” case of a vengeful spirit or some such thing, but as the novel goes on it becomes clear that nothing about the book is simple.  Characters that start out as harmless old men are quickly revealed to be very, shall we say, unconventionally amoral.  Harmless crazy cat ladies become hardened augurs, killing their cats to see the future.  An adorable brother/sister relationship turns out to be an act to prevent anyone from finding out that the “brother” is very very gay.  There are also androids, but I won’t say where.  And truly, nothing I’ve just said gives any indication to just how three dimensional the characters are, or even the witness characters.

Witness characters are unimportant and disposable characters used to show what is happening in a place where the main characters are not.  Usually they are people, but one dimensional people.  That is not the case here as a witness that returns a few times in this book is actually the wind, and it is used very effectively.

All in all I honestly can’t think of a time I did not enjoy this book while reading it, and jeez, if even my dad liked the ending I don’t know who wouldn’t.