Iron Thorn in my side 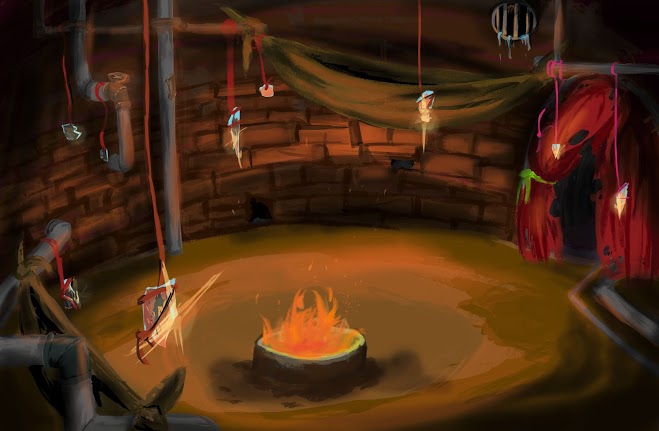 In case you’ve forgotten, I choose what books to read based on the cover art and how steampunk the title font is.  I was skeptical of The Iron Thorn, by Caitlin Kittredge, because though it had a sufficiently steampunk font, I also found it in the young adult section of the library, an area notorious for unnecessary love triangles and other cliches.  Nevertheless I grabbed it because my mom was getting impatient and we had to leave.  It is therefore all her fault that I had to read this.

In the beginning I was very hopeful for this book.  It passed the Bechdel test (two girls talking about something other than a man) on the first page, and the setting was very immersive.  It was a bit difficult to figure out when the story took place, true, but eventually I settled on somewhere in the 1940’s, which is an unusual time period for a steampunk book as they usually occur in the Victorian era.  The imagery was detailed, though.  It was also a bit hard to find out where the story took place, because it claimed to be in Massachusetts, yet. . . Everyone had a posh English accent and none of the cities are actually in Massachusetts.   For example have you heard of a city called Lovecraft?  Or Arkham? Probably not because the only place they exist are in the stories of H.P. Lovecraft, a horror writer.

So my hope began to diminish.  Unfortunately, it soon disappeared altogether, when the feared and terrifying unnecessary love triangle showed up, shortly followed by the dreaded myth of the other girl.  The main character Aoife( a name I could never figure out how to pronounce and ended up just saying “oof”) considers herself different from the other girls because she likes math and mechanics, and all the other girls like are boys.  I argued with myself for a bit over the meaning of this, wondering whether the author had only meant to make her a flawed character, and I have still not reached a conclusion.

The love triangle was thankfully only a very small part of the book, and Aoife never truly thought of it as a love triangle, it was really just the boys that did.

Something most of the men never thought about, though, was the sexism in the book.  Early on a man makes several unwanted sexual approaches to Aoife, and boys if you would like to know why catcalls are unappreciated this arc of the book explains exactly why.  The man was completely capable of overpowering Aoife should she have stayed around him for much longer.  This is fancy speak for “he wanted to and would have raped Aoife.”  In fact the only apparent reason he didn’t was because a boy named Dean Harrison knew he had a reputation and chased him off.

Dean Harrison was a blessing from the high heavens.  Even Aoife’s best friend Cal thought she was a weak and emotional flower not to be trusted with anything important, but Dean never thought anything of the sort.  He was also the only one to be truly sympathetic when she had worries, especially about her latent “craziness.”  Cal, who I mainly referred to as “YOU AGAIN,” blamed Aoife for going crazy and thought all she had to do was try harder not to be insane.  This is not what you do when your best friend has a mental illness, so take note.  Dean simply sat with her and supported her, and this is what you should do, so take note of this as well.

Thinking critically about the way the sexism and stigma of mental illnesses were presented, which was a very negative light, was actually the only reason I read this book after the first 100 pages.  Though I’m still not sure whether or not the other girls myth was purely for a flawed character, all the other instances of sexism were eventually overcome by her, and even some of the mental illness stigmas were dispersed.

Looking back on it all, I think perhaps the reason I didn’t originally claim this book was amazing was because I wasn’t looking for a book to make me think.  I just wanted to read a simple steampunk along the lines of the Finishing School series, and that is not what I got at all.  So if you’re looking for something to truly make you think, and think hard, about people, society, and sexism,  and still be a grand steampunk adventure, this is the book you should pick up.