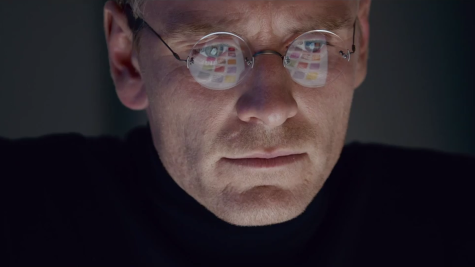 Danny Boyle’s exciting film which captures the genius of Steve Jobs, takes place in his mid career. The time when he first unveils macintosh, when he gets fired from Apple to when he starts up his failed company NeXT and when he comes back to build Apple into the beloved company we know today. It beautifully captures the crazy side of Jobs, and makes me appreciate the effort that was put into Apple.

Although Michael Fassbender, the actor who played Steve Jobs, looks nothing like Steve Jobs physically, he captures the emotions of Steve Jobs perfectly. In my opinion, he was an excellent choice for this movie. I was surprised by Seth Rogen playing Steve Wozniak since he is more known for his comedy movies. Steve Wozniak’s role in this movie is simple. He wants to get recognized for what he did. Every one thinks of Steve Jobs when talking about Apple. But Wozniak was the engineer behind all of it.

In the last two years we had three movies celebrating Steve Jobs. The first was Ashton Kutcher’s Jobs, the second was a documentary called Steve Jobs: The Man in the Machine, and the third is the Danny Boyle-directed, Aaron Sorkin-scripted film. It’s this one that is the Jobs film we want and deserve.