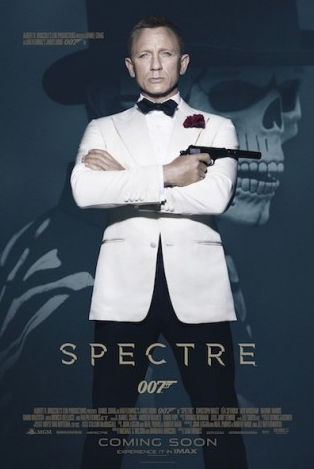 Stunts, thrilling fights, and plot twists. Those things are what you can see in the new James Bond movie Spectre.

I believe that this movie contains a lot of thrilling moments throughout this 148 minute movie. There are many moments where it looks like Bond might die. But Bond will never die (maybe).

This may come off as a surprise to some but my favorite scene was the car chase in the earlier half of the movie.

But a big issue I have with this movie is the fact that some of the things that take place in this movies don’t make that much sense. For instance the explanation of why Bond was in Mexico City and fighting people in a helicopter is simple yet it doesn’t make sense which is a big issue for me.

Also, some of the attacks on Bond and his partner came out of nowhere, which left me on the edge of my seat because you never knew when Bond was going to be attacked. I thought that this was good thing for the movie.
I wouldn’t define this movie as a great movie, but still it was very good. Overall I give this movie a 7.5 out of 10.