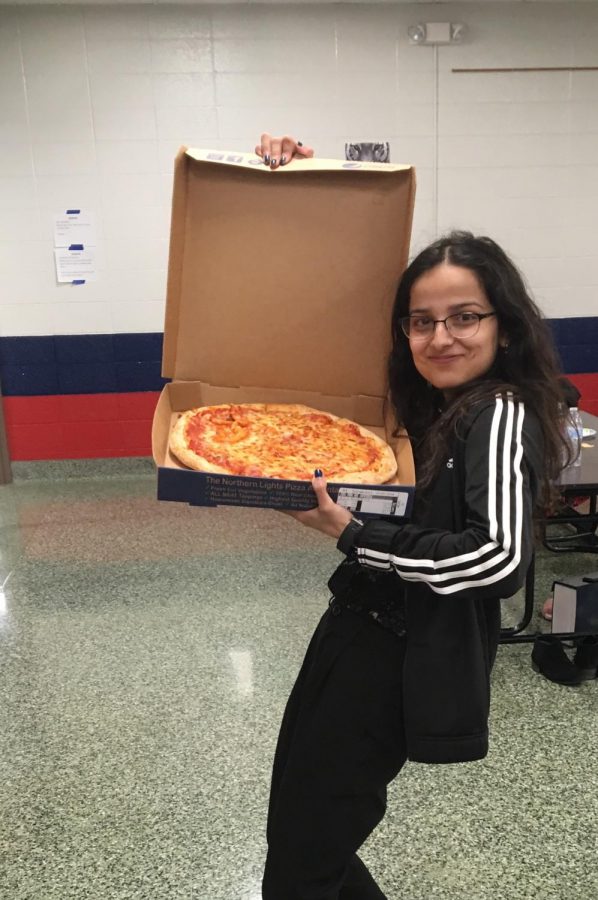 Dakshina stands holding a pizza, almost if asking, "You wanna pizza this."

“Everyone else can be a mom friend, but everyone needs a dad friend. Distant, but still there for you,” said Dakshina Paudyal, junior at Ames high and certified ‘hot spicy cheeto’ according to Irina Pogostick.

“I love dad jokes so much,” Dakshina said. “My actual dad never makes dad jokes so its like my burden in the family and it has transcended boundaries.” She stressed that if you lack a father figure or simply want a dad friend, you can hit her up. “I’d honestly be anyone’s dad friend.”

Dakshina is a self-proclaimed lowkey edgelord. “Honestly, at this point I might be nihilist, who knows,” Dakshina said. “Well low key nihilist, not full key, that would be edgy, but I am not trying to be like that.”

Nihilist or not, Dakshina has no shortage of radical opinions. “I believe in reincarnation,” Dakshina said. “I’ll probably be reincarnated as a slug. Also slugs are just frogs that skip leg day.” She went on to specify the latter was the radical opinion.

She gravitated away from the world of edgy extremism for a moment to ask some very relevant questions. “The moon landing, I am kind of stuck between was it fake? Or is the moon even real?” Dakshina said. “Like how do we know that the moon is not just a hologram projected by the aliens that have infiltrated the government and that is just what they want us to believe?” She continued on to make well-supported claims about reptilians, government insiders, and men in black, citing reputable sources such as openyourthirdeye.com.

Dakshina, when not extrapolating on the ramifications of all of known existence being a simulation, is participating in Debate, Model UN, and Speech.

“Debate’s so versatile,” Dakshina said, “It forces you to be aware about current global issues and to analyze every aspect of it. It kind of forces you to be open minded.” She has competed in debate since freshman year and won a variety of awards over the years, including 1st place at Tournavelt, Semifinalist at IHSSA state, and Semifinalist at IFL state. However, Dakshina will be the first to tell you that winning isn’t what it is about.

“It is more about the relationships that you have in [Debate],” Dakshina said.“I take pride in the people I surround myself in.” She said that despite not having Mrs. Deam as a teacher, she had been extremely influential to Dakshina as the debate teacher sponsor.

Dakshina has also taken ISU classes in Criminal Law and Philosophy and plans to in the future  take classes in Anthropology and Journalism. All of this is to prepare her for her future career which she hopes has something to do with law and political science. However, her dream job isn’t terribly specific, “Anything where I am making a lot of money and I reply to all my emails with ‘OK -sent from my iPhone.’ I want to have that kind of power,” Dakshina said.