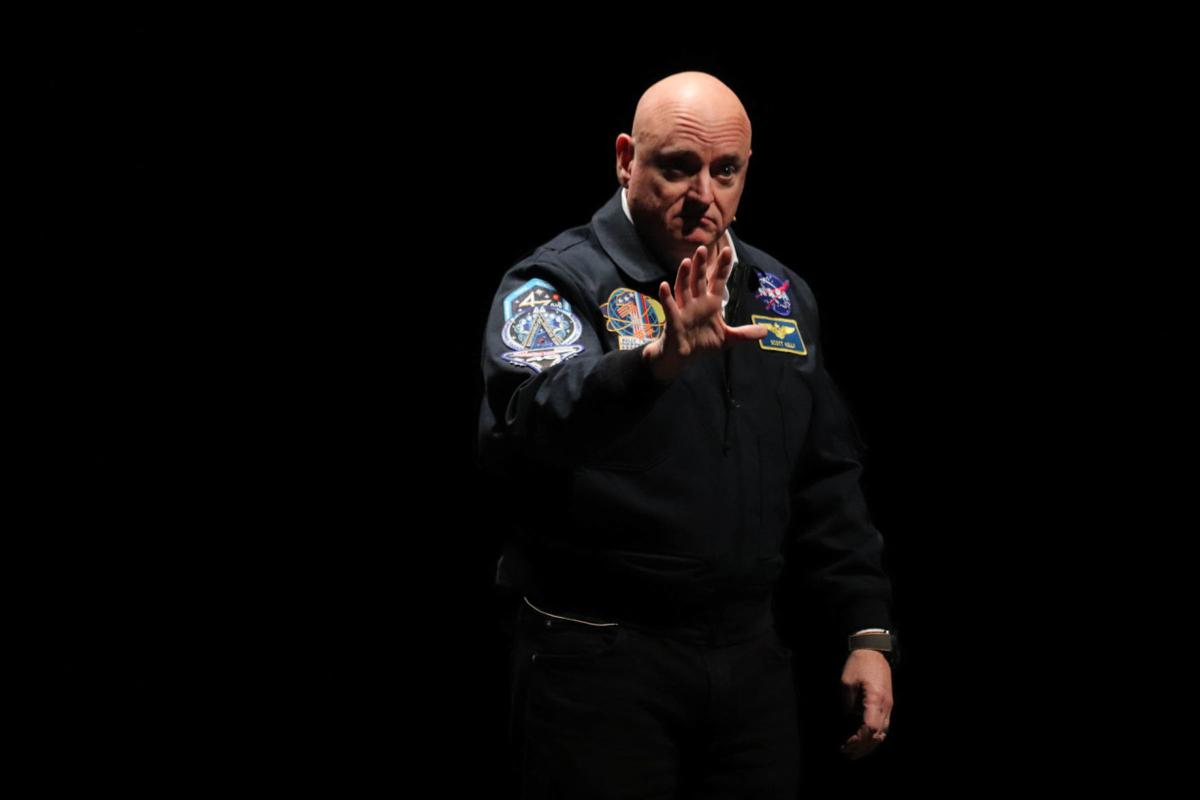 The Sky Is Not The Limit: Astronaut Scott Kelly comes to ISU

A nervous but energetic anticipation seems to invigorate Stephens auditorium as the crowd makes its way into the main hall, the faint sound of Elton John’s “Rocket man” drifting in the air as the seats quickly fill. The lights dim, and onto the stage walks the man of the hour: astronaut, engineer, and four-time space flight veteran Scott Kelly.

Kelly has made headlines recently for his role as a participant in the NASA twins study – a yearlong study conducted in 2015 to study the effects prolonged time in space had on the human body. While Scott Kelly spent a year aboard the international space station, his twin brother and fellow astronaut Mark Kelly remained on earth, acting as the control subject in the experiment.

“Bad things happen to our physiology, we lose muscle and bone mass at 1% a month. If after 100 months, you did not exercise, you’d have no skeleton left. You’d be like gumby. “Kelly said. “We need to understand how the human body copes with this extreme environment if we want to go to Mars someday,”

The experiment yielded several interesting results – 7% of Kelly’s genetic code which had changed in space has still not changed back. Interestingly, Kelly’s telomeres (a protective covering at both ends of each chromosome which shorten with age) grew longer in space, although they have since returned to their normal size. While in space, Kelly said that his immune system was “in overdrive, like it was being invaded,” although the cause of this is not known.

On his February 18th visit, Kelly also discussed his background and the path he took to becoming an astronaut.

While recent successes may suggest otherwise, Kelly said that he was never especially gifted or talented growing up. According to Kelly, while his brother Mark excelled academically, he remained a lackluster student. After entering college and stumbling across a copy of Tom Wolfe’s The Right Stuff, Kelly knew that he wanted to become an astronaut. Kelly enlisted as a navy pilot several years later.

Despite having launched space shuttles multiple times, Kelly pointed out that he wasn’t a particularly good pilot – his first attempt at landing on an aircraft carrier nearly ended in disaster, with the tail part of his plane colliding with the side of the ship.

“He says to me and he goes, “are you sure this career is for you? You just failed, and we’re sending you home,’” said Kelly, describing his conversation with his supervisor shortly after.

Despite this initial challenge, Kelly said the power of simple hard work made it possible for him to overcome this obstacle. “How good we can become at something has nothing to do at all with how good we are when we start, and I am a prime example of that,” Kelly said. “The power of just hard work and never ever, ever, giving up has really been a lesson for me, that you have dreams and you can achieve them.”

Kelly also touched upon the role of artificial intelligence in future space operations.

“I think it’s a challenge….in some ways we don’t deal with our current level of technology very well, we don’t handle this information that is constant,” Kelly said. “We just [have] to be really careful, but I think there’s a place for it in space.”

Kelly said that his experience in space provided him a broader outlook on humanity, which he believes needs to work together to solve the problems of the 21st century. “When you have this perspective of earth, and you look and see our planet…you get the sense that, we are all on this earth as part of the same team together, and if we’re going to solve any problems, we gotta work together. We’re all part of the same team.”

“If we have a goal and a plan, if we’re willing to take risks and make mistakes, at times be willing to fail, if we focus on the things that we can control, and ignore the things we can’t, if we test the status quo and and work as a team…if we choose to do the hard things, and if we do that, the sky is definitely not the limit.