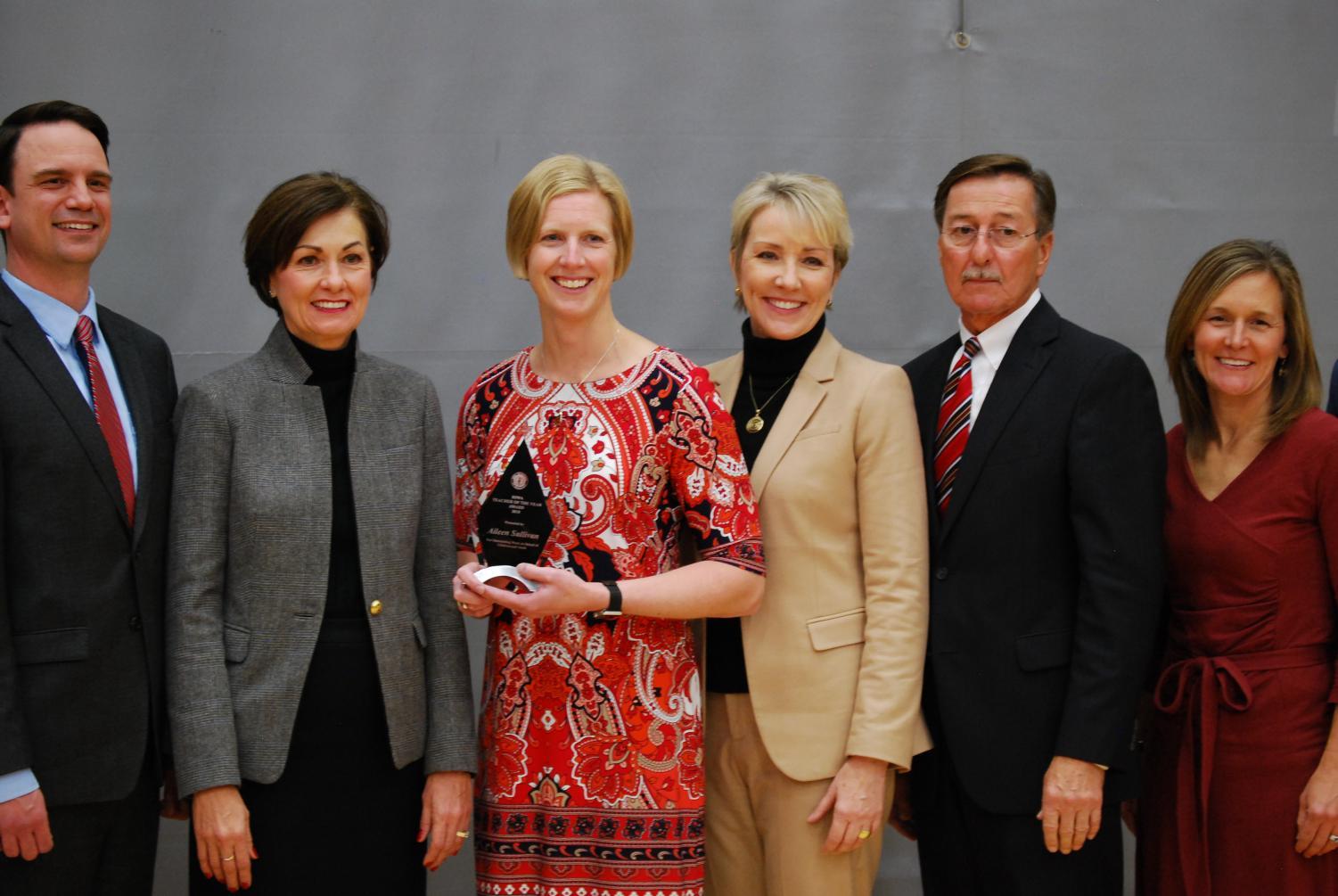 Sullivan for the win

Aileen Sullivan stands at the front of the classroom in a lab coat, goggles framing her eyes , and ear muffs clasped over her ears. In an outstretched arm she holds a meter stick, at the end of which is a lit match, reaching out towards an orange balloon. The students hold their ears in anticipation. Suddenly there is a boom and the space formerly occupied by the balloon is engulfed in a ball of flame.

“I love demonstrations as a way to show what’s going on,” said Aileen Sullivan, Chemistry Teacher at Ames High School. This demonstration was to show the combustion of hydrogen. Last Wednesday, students packed the gym for a “mystery” assembly . There, Governor Kim Reynolds recognized Aileen Sullivan as 2018 Iowa Teacher of the Year.

In her acceptance speech to the students, Sullivan told a story about a career survey she took as sophomore in high school that suggested that she become either a flight attendant or a chemist. It had not been much of a choice to choose the latter, she said.

Her motivation, in part, originated from a bad experience in Chemistry in high school where her teacher showed primarily movies.

“It probably stems back to my time in school, that it felt like such a waste of time when my teacher wasn’t there to teach,” Sullivan said. That teacher wasn’t a bad person, but they did show Sullivan that there was a need in the world for passionate teachers, she said.

After receiving her BA in chemistry and BA in chemistry-teaching from University of Northern Iowa; she came to teach at Ames High where she is now beginning her 22nd year of teaching. “I was really good at making outlines of the book and then giving notes my first few years,” Sullivan said. “One day I was standing at my white board and it just dawned on me that I know exactly what’s going on and they don’t, the students don’t. They are just copying my understanding.”

She said from that moment she wanted to not only teach chemistry, but also teach learning skills.“We can’t waste time. We have 42 minutes a day,” Sullivan said.

Sullivan was nominated for the Teacher of the Year award by her husband, Social Studies teacher Joel Sullivan. From there she had to fill out an application that asked her many questions about her teaching and send in resumes.

Then she was interviewed by a committee, that according to the Ames Tribune, consisted of representatives of the Iowa Department of Education, the Iowa State Education Association, the School Administrators of Iowa, the Parent Teacher Association and the past Iowa Teacher of the year.

Finally, she received a final email requesting her to answer one more question via video chat. She said she was apprehensive about having to answer another question, feeling as though it must be in response to her missing something in one of the interviews.

“The question was ‘what do you think about being the Iowa 2018 Teacher of the Year?’,” Sullivan said. According to Sullivan, this occurred on September 8th which forced her to keep it a secret for almost two months until the big reveal at the assembly on Wednesday.

The students were on the edge of their seats, eager to learn to why they have been summoned to this special assembly. This eagerness is mirrored in the classroom. After all it is hard to not pay attention to a teacher who begins her class with a boom.