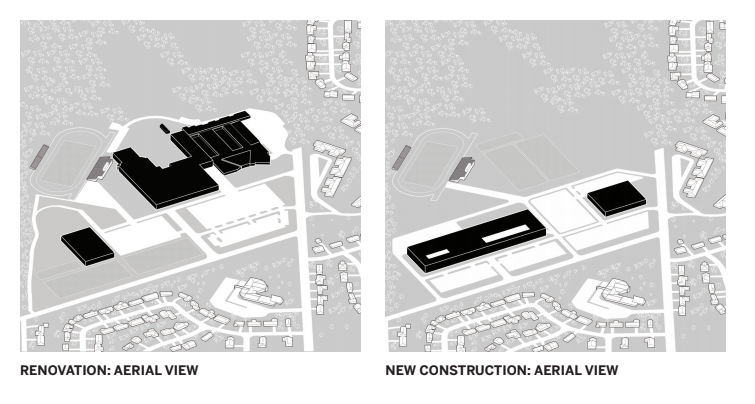 Our role in a new high school

On April 3rd Ames will be holding a community wide vote on whether or not the Ames Community School District should issue $110 million in general obligation bonds for the funding of a new high school building and expansion of three elementary schools.

There is some contention on whether or not a new high school is necessary, especially with its price tag of $95 million.

“The major problems with the current school are its narrow hallways, spaces with insufficient maximum capacities, and the 83 entrances and exits that pose a security threat,” superintendent Tim Taylor said.

“The shell of the existing building is pretty good,” Taylor said. However, if neither a new building or renovation of current building takes place, the resulting “do nothing” plan would cost the district $30 million over the next 15-20 years, according to Taylor.

“After the board received [Haila’s survey] and discussed it on numerous occasions in work sessions, they kind of came to the conclusion that [building a new school] is a no brainer,” Taylor said. According to Taylor, it made more sense to invest initially in order to save later on maintenance costs and by implementing more efficient systems such as geothermal to reduce utility costs.

In light of recent mass shootings such as the the one in Parkland, Florida, security is a major concern with the current building. Numerous entrances into the building, as well as its lack of compartmentalization pose serious safety threats.

“I don’t want it to be this lock down environment for all of you,” said School Board president Alisa Frandsen. “In today’s society we have to figure out a way to responsibly manage the environment our kids go everyday.”

Taylor assured a new building wouldn’t resemble a penitentiary, but rather be arranged so that visitors to the school must first pass through a vestibule (similar to the current main entrance) before entering the building. A shooter attempting to enter the building may be able to get through the vestibule, but adequate sectioning of the school would allow for a panic button to be pushed and for doors to automatically close, secluding the shooter into only one section of the school, mitigating the damage he or she is able to inflict.

“There are opportunities for improvement in security that we absolutely need to address,” Frandsen said. “But there is also the piece of how you can make it so this facility can be open to the community outside of the school hours for all of the different activities.” A new building, Frandsen said, would allow for both.

Visions for a new building also include an updated vision for education. New plans will include more flexible and agile learning space where small group collaboration among students can take place.

The new school hopes, with its physical spaces, to break away from what Taylor called “the industrial model, some people even call it a cemetery… the desks are just lined up like tombstones in rows,” in exchange for a 21st century approach to learning that stresses collaboration, communication, and interdisciplinary learning.

Taylor also envisions makers spaces, allowing for hands on project-based learning, as a very important part of a new school. “If you have great ideas you need a place to go build it and work on it and see if it really works,” Taylor said.

“Additionally, the benefit of building a new school, as opposed to renovation, is that it doesn’t displace students for as many years,” said Frandsen. HAILA architecture predicted that renovation would take five years while building new would only take three. Frandsen also said building new would allow students to attend classes in the old building, while the new building is being constructed where the current practice fields are located, resulting is less disruption to learning.

“If we’re going to do this, we have to do it right,” said Frandsen. Critical to doing it right is getting input from Ames High students. The question that Frandsen is hoping students can answer is, “What does everybody expect to come out of [an] experience as a student at Ames High and what are the physical spaces needed to be part of it?”

If this referendum passes, it will begin a six month design and development where the education specialist at OPN architecture firm will collect input from students and staff, putting current students of Ames High in a unique and important position.

We, as Ames High students, must advocate that the new building includes the same spaces that allowed for high school to be not only a deeply educational experience, but also a memorable one that can be cherished. It is our responsibility to make sure that the new building is constructed in the best possible way for the students who will follow us. If there is something that currently exists in the high school that is dear to you, speak up. If there is something about the current building that you have always found obstructive to your learning, make your voice heard.