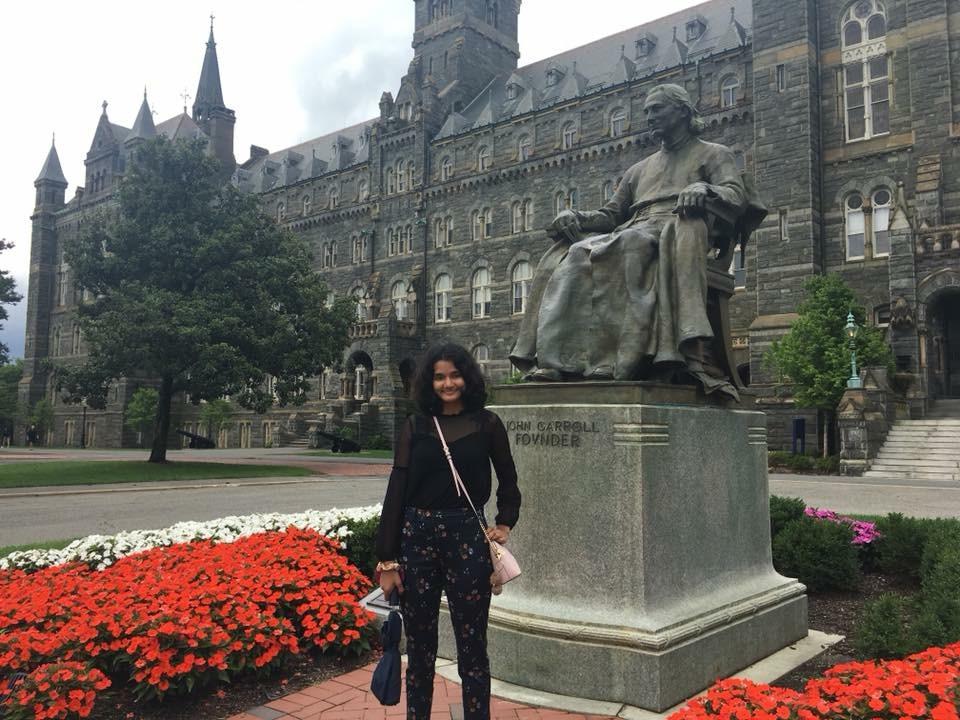 It’s a rainy day. The sky is gray like the cobblestones of the road and the pale bricks of the buildings. In the distance, the towers of Healy Hall split the sky. Anu Lamsal pauses in front of the statue of Bishop John Carroll for a picture. Her college tour of Georgetown University begins a few minutes later. The way Georgetown balanced the Jesuit principle of helping others with an emphasis on religious freedom appealed greatly to Anu. It was after this tour that she knew that she wanted to attend Georgetown. The path to get there, however, is not a linear one, often starting in early high school

“I always had it in my head that I needed to have A’s or A+’s,” senior Anu Lamsal said. For Anu, a B+ felt as if it would instantly destroy any chance of getting into an elite school, leading her to forgo hanging out with friends in order to study and maintain her GPA. While GPA had been a concern for Anu for all four years, the rest of the process didn’t really begin until junior year.

She recommends that students begin taking standardized tests at this point so they can get a feel for the tests. In fact, she tells students to not study at all for the first test, instead recommending that they just take it to get a feel for the test and identify areas that need work. Anu took both the ACT and the SAT. By doing this she was able to identify which test was a better fit for her. She chose to take the ACT two more times. This allowed her to effectively study the areas she needed and practice time management.

English teacher James Webb, who has taught the ACT/SAT prep class at the high school for several years, echoed this, “It’s important to have some strategies going in, especially for time management,” he said. “I think that is the biggest thing people struggle with.” By effectively studying, Anu was able to bump her score up several points, something that is very important for the college applications.

Anu stressed that students have to join electives out of interest, not just to pad their college applications. “The clubs I joined out of ‘oh my god’ frantic resume stuffing I didn’t even put on my resume because I didn’t feel like I had any impact on those.” The clubs that she did put on her resume were clubs like Debate, Feminist Club, and Model UN, which she joined freshmen year out of pure interest.

By being an engaged student who also gets involved beyond the classroom, students are able to better determine what college is a good fit and able to have diverse experiences at his or her fingertips when the essay writing process begins.

Picking a college comes down to a lot of researching and visiting colleges. There are a variety of tools online to narrow in on a few top choice. Once a school is identified as a top choice, perusing the school’s website in a great way to determine if it will be truly be a good fit. It is impossible to research every school, and a perfect match doesn’t exist. Finding a few different schools that are a good fit with varying levels of selectivity is the best choice. Continuing to search and search for the perfect college can be a waste of time once a few have been identified as an excellent fit.

The next step is to apply. For most schools, this means filling out the Common Application. There are some schools that require their own application, such as MIT, ISU, and Georgetown, but for the most part the Common App offers an organized, simplified way for students to apply to multiple schools. The majority of the Common App is a lengthy segment for student information, everything from home address to parents year of graduation. Next, students must choose one of six essay prompts to write. They will submit this essay to every Common App college they apply to.

Many schools have supplemental questions and essays specific to their institution. For instance, most schools will ask why a student wants to attend that school. Some schools will also have additional questions aimed at gauging creativity. UChicago is famous for its unconventional prompts that asked students to imagine a 13th century ocean voyage where they suddenly sail off the edge of the world, or create a magical spell and describe its effect. Anu recommends filling out the bulk of the Common App during the summer before senior year, including the essay.

“If you already have that first Common App part done it’s a lot less stressful, and I would suggest writing your Common App essay as soon as you can because it allows you to 1.) be all ready for early decision and early action deadlines, and 2.) you have a lot more time to revise them.”

Most schools offer a variety of application dates: Early Decision, which is binding, Early Action, which allows students to receive an expedited admission decision, Scholarship or Honors College deadlines, and then a Regular Decision deadline. Most of these deadlines range from November 1 to January 1. “One of the most important things in the whole college application process is to be aware of your deadlines!” said Julie Bryant, Ames High Counselor.

Starting early and knowing these deadlines are the most important parts of the college application process. By being on top of these two things students are able to submit the highest quality work and do so on time. This early start is doubly important when letters of recommendation are considered, where students are asking another person to take time out their lives to carefully write a letter for them. Nearly all schools accept and recommend teacher letters of recommendation, but not all of schools require them.

Typically, schools are looking for a teacher in a core subject area who the student has had in their high school career, preferably junior or senior year. Many schools also allow students to submit additional letters of recommendation from another source— an elective teacher, a boss from work, a professor that oversaw an internship, etc.. Lastly, many schools require a letter of recommendation from a school counselor.

At Ames High, all teacher and counselor letters of recommendation are requested using a physical form provided by the school. The form asks students to give each teacher and counselor a list of the schools that they are applying to and for them to provide a resume and personal statement that the teacher can use as a reference. The teachers and counselors then use Naviance, an online service students have used since middle school, to submit to the schools. For all Common App schools it is necessary that student’s Naviance account is synced with Naviance.

Webb, who some years writes over 40 letters, advises students that the sooner they start, the better. The absolute minimum for requesting a letter of recommendation is three weeks before the deadline. “It’s part of the process and I am happy to do it,” Webb said, but also added that “a small thank you goes a long way.

Once a student has assembled the filled out the Common App, written his or her essays, collected the letters of recommendation, and paid the fees, the click of a button finalizes the process. “It’s exciting sometimes seeing [students] chase after dreams and apply to the schools they are really interested in,” Webb said. For students it is an equally exciting process.

“What I’m most excited about for college is finally getting to learn about the subjects I’ve always wanted to,” Anu said. “I’ll have the freedom to study a subject I’m actually interested in, and I can’t wait for that!” With application submitted, the wait can be agonizing, but eventually a response comes. For many students their college dreams are realized, but for some the the result is a rejection letter or fruitless waitlist.

For Webb it is hard to see students struggling with rejection. “It’s really frustrating because a lot of students put so much pressure on themselves to get into the elite school and can just be crushed if they don’t get accepted.” In the end, it is less about the school a student attends and more about whether the schools is a good fit and that student makes the most of it.