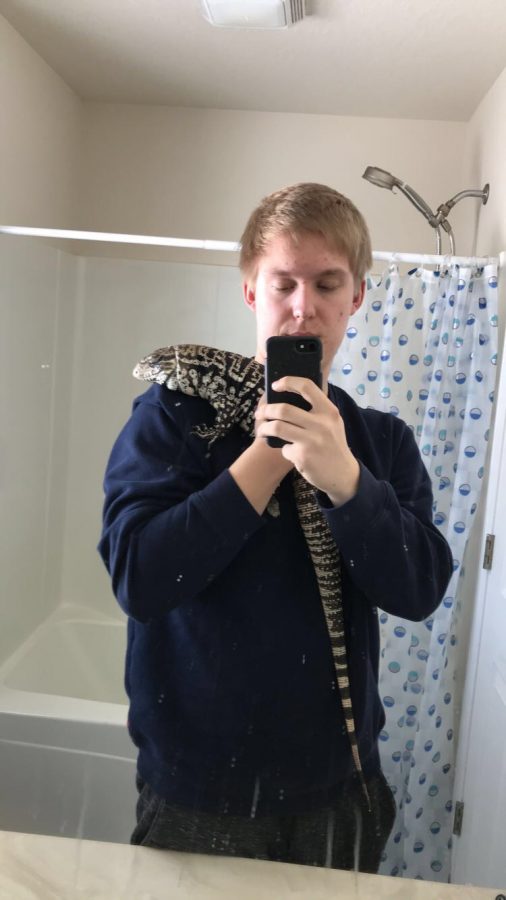 Sean takes a selfie with his Tegu.

The Reptile Room is the second book in A Series of Unfortunate Events. In the book, the Baudelaire orphans find themselves in the home of their uncle and renowned herpetologist Dr. Montgomery. An entire room in Dr. Montgomery’s home is packed to brim with the reptiles. One might assume reading this novel that such a room exists only in fiction, but they would be wrong.

Senior Sean Prell house is the real life version of the reptile room, with reptiles in almost every part of the house.

“[The reptiles] are spreading through the whole house,” Sean said. “The majority of them are upstairs, and there are some downstairs in the living room, in the office, there is one in the kitchen, and there are some in my brother’s bedroom.” His impressive collection of reptiles includes some geckos, an Axolotl (a Mexican water salamander which is extinct in the wild), a breather dragon, an Argentine black and white tegu (4 foot lizard that’s like a dog), two snakes, and a mouse.

“I think I have just always loved animals a lot,” Sean said. When he was younger, Sean lived in California where there were a lot of reptiles. It was during this time where cemented his love for these scaly creatures.

Sean plans to spend his life helping not only his scaly brethren, but all animals. Sean already volunteers every Wednesday at the ISU Wildlife Care Clinic.  After high school, he plans to study microbiology at ISU, get accepted into the ISU vet program, get a Doctorate of Veterinary medicine, and then further specialize through a three year residency.

While he has a daunting amount of education ahead of him, he isn’t worried.

“I don’t worry about that because I don’t see myself doing anything else,” he said.

His love of animals even extends to his diet. Sean has been trying to adhere to a vegan diet.

“I have always had a moral conflict in myself. It hurt me. To know I am doing that to other animals. It kinda hurts.”

I have the record for the fastest time to eat a pound of lettuce. 3 minute and 41 seconds.”

“I have the record for the fastest time to eat a pound of lettuce. 3 minute and 41 seconds,” he said.

When not tending to his reptiles or gobbling down lettuce, Sean spends his time hanging with the boys.

While it may seem that Sean has gotten himself mixed up with the wrong lot, everyone who knows him describes him as kind and very loveable.

“I’m happy that people see me as a nice guy. I don’t like it when people are mean,” Sean said. In line with his kind nature, Sean offered some expert advice to the underclassmen.

“I would say high school is like a valley,” Sean said. “Freshmen year is pretty good, sophomore year was the worst year of my life and it’s slowly been building up. Seniors years is pretty fun. If anyone in sophomore year is struggling, just wait. It gets better.”